What is the Great Divide Trail?

This article originally appeared on The Trek, which can be read here

On the international border between Glacier National Park (Montana) and Waterton Lakes National Park (Alberta) lies a survey monument that marks the northern terminus of the CDT and southern start of the Great Divide Trail (GDT). Stretching over 700 miles (1,130 km) northwest to Kakwa Provincial Park in British Columbia, and crossing the continental divide more than 30 times, the GDT is a route that takes you through everything from popular hikes along some of the most iconic backpacking trips in North America, to remote decommissioned trails, days from the nearest road. With multiple alternatives, optional high alpine routes and a wide selection of entry and exit points, the GDT truly is a “choose your own adventure” experience.

Taking most folks six to eight weeks to complete, the trail passes through five National Parks, nine Provincial Parks and a variety of wilderness and forestry lands spanning two Canadian provinces. Unfortunately, unlike the Pacific Crest Trail, there is no single body to coordinate the issuing of permits, meaning hikers need to be aware of the multiple jurisdictions and rules involved.

There are sections of the trail where it’s only a few days between resupply and day hikers are plentiful, however, there is also the final section where you’ll walk 160 miles (260km) without crossing a single road, nor, in many cases, even a fellow backpacker. This puts more onus on the GDT thru-hiker to be self sufficient and plan accordingly. 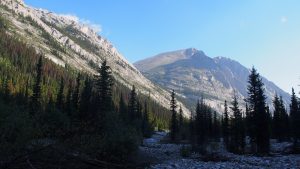 While folks can, and do, complete the CDT or AT with little or no backpacking experience, it’s not something I’d recommend for the GDT.  While that parts I’ve experienced are incredible, it’s not for the beginner. You start in the mountains and amble down valleys and over passes for the full duration. It also doesn’t ease you in, you’ll climb 4200ft in the first day or two, and it will be 7-10 days to your first resupply. There is the potential for snow in July and August and it’s not uncommon for temperatures to drop below freezing at night.  While the trail has gained popularity in recent years, don’t expect to encounter a lot of folks doing the full thru-hike, and sadly, you won’t find much in the way of trail magic.

Over the coming weeks and months, I’ll share more about the GDT, the route, it’s history, planning and this summer, my experience on the trail.

I’m looking forward to it

← Previous Article: Back to Elk Lakes Next Article: Permits on the Great Divide Trail - Part 1 →

History of the Great Divide Trail