Getting Ready for Summer – 2022 Edition

Hard to believe, but May is already coming to a close. While spring has definitely arrived in the city (although we did have a big snow storm the week before last), things aren’t quite ready yet in the mountains. It’s been a bigger than average snow year in the Canadian Rockies and the melt is just starting. Valley bottoms are largely snow free, but the peaks and passes are still holding on.  Never the less, planning for this summers adventures has been well under way for some time.  With backcountry reservations in the National Parks opening late January, there was the annual mad rush as folks worked to lock in their trips. Even with some technical frustrations, I was fortunate enough to get permits for a few trips this year.

Book ending this season will be will be Section C of the Great Divide Trail. Starting in late July, I’ll hit the trail in Peter Lougheed Provincial Park and check out the refurbished campground at Turbine. From there, it will be over the North Kananaskis Pass and the remote reaches of Height of the Rockies Provincial Park and the Palliser Valley (a place I’ve always wanted to explore). I’ve started volunteering with the Great Divide Trail Association and will be scouting parts of this route to guide future trail maintenance planning.  Crossing into Banff National Park will be a study of contrasts. Starting with the less popular Spray Valley, I’ll hike up the popular Bryant Creek corridor which leads to Mount Assiniboine Provincial Park. I did a bit of this trail a few years back as part of a winter cross country skiing adventure, but we didn’t go all the way into BC that time (staying at the Bryant Cree Cabin now being replaced). I’m really looking forward to the incredible views from Wonder Pass and the core areas of Mt Assiniboine. Just this week I secured the last permit I needed at Og Lake. The last time I was there was 2014 and that was just a day hike from the campground at Porcupine. I had told myself that I needed to spend a night there some day, and this summer will be that day. Back into Banff I’ll finally get to explore the area around Egypt Lake past Sunshine Meadows. With stiff competition for permits, I wasn’t quite able to get the exact routing I wanted, but a mix of short days and side trips will give me an opportunity to finally experience this part of the park. Again due to available permits, I’ll head over Ball Pass and head down to highway 93 where I’ll pause finishing the Rockwall until late September. For those of you who know me, Rockwall has been my backpacking Kyptonite. This will be the 4th time I’ve managed to book it. The first time I had to cancel due to work commitments, the second due to fire closures, the third time I made it up to Floe Lake, but illness prevented from continuing. Fingers crossed that the weather will hold for a late season attempt. 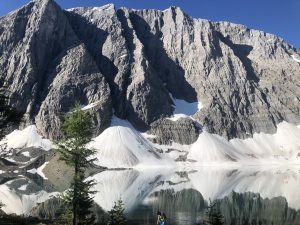 A few weeks later, the family and I will spend several days front country camping in Glacier National Park (BC not Montana) with our tent trailer. We’ve driven through the Rogers Pass plenty of times, but this will be our first time staying. A mecca of hiking in the summer and ski touring in winter, I’m sure the S’mores will taste great in the towering Selkirks. There are several day hikes I’ve looked at over the years that we’ll finally be able to check off the list.

Wrapping up the month of August, I have two smaller trips planned. Me and my kids will first head out for two nights of backpacking around Skoki Lodge and the valleys and passes behind the Lake Louise Ski Resort. A popular destination, the area had a lot of press coverage a decade ago when the Duke and Duchess of Cambridge (William and Catherine) stayed there. I’d love to cross country ski into the lodge and stay there some winter, but it’s not an inexpensive destination.  After Skoki, I’ll head back up the Yoho Valley for a new nights. I had a great time there last fall when I was able to score some last minute permits. It’s a spectacular destination and wanted to spend a few more nights up there and take in the Iceline trail again.

Giving back I’ll also be joining the Great Divide Trail Association for a trail maintenance trip at the end of June as they work to officially open the High Rock Trail this summer.

It will be a busy summer and I’m sure I’ll fit in a few more nights hear and there as the schedule allows. With so many options for dispersed camping in the foothills and front ranges there is never a lack of places to explore near by.

Two guys in the woods is dedicated to backpacking, camping gadgets, and adventure stories. Mostly it’s an excuse for us to go on hikes, and share what we learn

Alpenglow at Burstall in the upper Spray Valley @BanffNP

History of the Great Divide Trail

Resupply on the Great Divide Trail