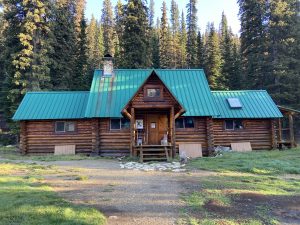 I must admit, Yoho National Park is quickly becoming one of my favorite places to explore these days. With family in Kelowna, the drive through Yoho on the TransCanada is something we’ve done dozens of time. As a child I’ve spent many nights in the front county campgrounds at Kicking Horse and Monarch. However it’s only the past few years I’ve started exploring the backcounry in this park.

Canada’s second national park, Yoho was created in 1886 after Canada’s first Prime Minister visited the area while inspecting the newly opened Canadian Pacific Railway. Part of the Rocky Mountain Parks World Heritage Site, the park contains high mountain peaks along the Great Divide, icefields, stunning waterfalls, beautiful lakes and the Burgess Shale (some of the best-preserved Cambrian era fossils in the world). For train buffs, there are the two spiral tunnels, built in 1909 to reduce the grade along the dangerous “Big Hill” into Field.

With 6 backcountry campgrounds, 1 walk-in tent campground, 4 Alpine Club of Canada Huts, random camping in the Amiskiwi Valley and the Lake O’Hara, the opportunities for backcountry adventures span from the rugged and rustic, to luxury.

My first backcountry experience in Yoho was in 2015 when I took my kids out for an overnight trip along the Iceline trail. While weather wasn’t the greatest, the views as we climbed up the side of the Yoho Valley were incredible and I knew I had to get back at some point.

Skip forward to the summer of 2021, when I was able to secure a last-minute overnight permit at Twin Falls in mid-September. Unfortunately they had removed the bridge along the Whaleback Trail the day before which meant I had to take the less scenic Marpole Lake route out. It made me want to come back again and explore a bit more of the park.

From the Takakkaw Falls trailhead (don’t forget to check out the falls themselves), the first few km follow an old roadbed which parallels the Yoho River. It’s an easy start and you’ll quickly pass through the Takakkaw Falls walk-in campground. This is a great place for a first “backcountry like” experience, or as a way to test out new gear. The parking lot at the falls can be busy in the summer, so best to get there early. Following the river, you soon come across a junction with two short side trails to Point Lace Falls and Angel Staircase Falls. Both are well worth it. Here the trail leaves the ol

d roadbed and starts to climb. The Yoho River enters a picturesque shallow canyon as you approach Laughing Falls. Here you’ll encounter another side trail to Lake Duchensey, but the two times I’ve been there, it’s mainly been mud flats. Perhaps it’s more of an early season destination.

There is a nice campground at the foot of Laughing falls and I’d highly recommend it as a place to introduce someone to backpacking. It has easy access, great views, nice sites and of course, the falls. From here, the trail splits. Continuing up the Yoho Valley is the campground and ACC Hut (currently closed) at Twin Falls. The Whaleback Trail is also accessed here, but confirm that the bridge is before you go. The other path leads up the Little

Yoho Valley and the Stanley Mitchell ACC hut. The Iceline Trail and unmaintained route over Kiwetinok Pass (one of the GDT alternates) also connect at the head of the valley. This is the direction I’d follow on this trip.

I made good time to Laughing Falls, grabbed a snack and headed up towards Little Yoho. The trail climbs steeply (about 300m in 2km) and views start to open up as the trees begin to thin. Along the way you’ll hit trail junctions that connect back to Whaleback and Celestine Lake. After the initial climb, the trail levels out a bit as you make your way to the meadows in front of the ACC hut and shortly afterwards the Little Yoho Campground.

After setting up my tent, I spent some time exploring the area. I wanted to check out the hut as a potential winter destination and It’s a nice destination for those who want to experience the backcountry, but aren’t quite ready to tent it. This was when I heard a helicopter approaching. For the second time this summer I got to have a front row seat of a landing helicopter in the backcountry. This time, it was under less ideal circumstances. A hiker had suffered an ankle injury on Iceline from a falling rock and was unable to self-evacuate. Thankfully it didn’t appear serious, and while the first responder didn’t seem to think it was broken, they decided to evacuate the hiker and get it looked at the hospital in Banff.  With the helicopter’s departure, a few scattered showers rolled through, leaving a cool, but clear night.

Bright and early the next day, I hit the Iceline Trail, doing it the opposite direction from last time. There were a few blowdowns as I climbed up the side of The President and Vice President, but overall things were i 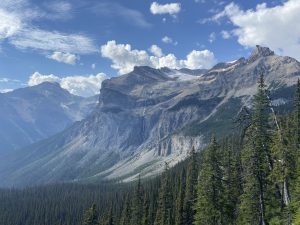 n good shape. From here you can hike over Kiwetinok Pass and the random camping beyond. I chatted with a couple of ladies who had been hiking section D of the Great Divide Trail southbound and had come over the pass the day before. It’s on my list of places to explore as I check off sections of the GDT.

As you gain elevation, various glaciers and icefields start to come into view. It truly earns its moniker, “Iceline”. I took a break at the high point and laid out my fly to dry from the previous night’s rain. Skies were clear with a little bit of smoke coming in from the south. Each lateral moraine you cross gives you another basin of wonder, and you’re never far from the effects of ice and water. Before long I was back in the trees and over to Yoho Lake for the night.  The lake was beautiful and I laid out my tent to finish drying it off.

A group of artists arrived shortly after and set up easels around the lake to paint its breathtaking scenery. Talking to the organizer, he offers a week-long guided trip every summer taking budding artists through the mountain National Parks and day hiking into various destinations for painting and sketching. There are just so many ways to experience the beauty of the mountains.

Since the day was still young, I decided to day hike up to Yoho Pass and see what I could see. Now while the pass itself wasn’t very impressive (it’s entirely in the trees with no views), I continued up the Wapta Highline Trail and within 15 minutes emerged into the open and breathtaking views of the Emerald Lake Valley below and the imposing edifice of Michael Peak above. I’m glad I decided to press on a little further to see what I could see. Back to the campground, I made up some dinner and talked to a family who were doing a two-day loop over Burgess Pass.

The last day was a short down and out trip back to the trail head. The morning was cloudy with the potential for some rain. Still the sun managed to peak out here and there as it rose, lighting up the mountain tops. Rather than making up

a breakfast, I decided to grab a bar, break camp and head out. The first section loops around the lake and provides some nice views. Connecting back to the Iceline trail, it drops steeply, loosing about 300m in about 1.5km. I remember climbing it coming the other way during my 2015 trip. Day hikers looking to do Iceline were up bright and early and a Parks Canada guided trip was shepherding a group up the switchbacks. As the bottom you pass the HI Hostel, cross the Yoho Valley road and before long you’re in with all of the tourists taking in Takakkaw Falls. It was a nice quick trip and an opportunity to explore a few new parts of Yoho. Fingers crossed for the Lake O’Hara lottery next year.

What is the Great Divide Trail?